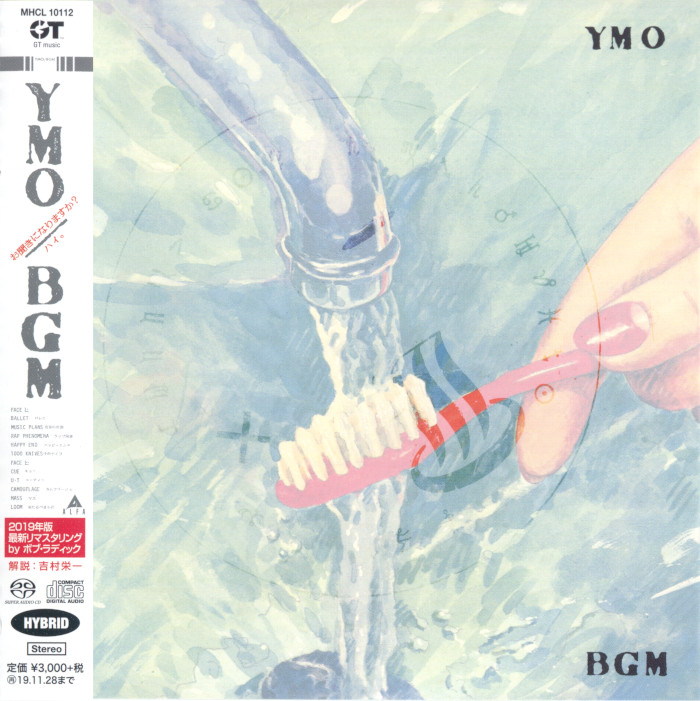 BGM is the fourth studio album by Yellow Magic Orchestra. The title stands for “Background music”. This album was produced by Haruomi Hosono. Recording started on January 15, 1981, in an effort to release the album by March 21, 1981. YMO was the first band to use the Roland TR-808 Rhythm Composer, one of the first programmable drum machines, as early as 1980. This was their first studio album recorded with the Roland MC-4 Microcomposer and TR-808.

BGM stands for “background music,” and one could be mistaken for thinking that this is an album of ambient-sounding tracks. Instead, it’s a continuation of YMO’s techno aesthetic, focusing more on Takahashi’s distorted vocals and similarly liquid synth sounds, which give much of the album a melancholic air. There’s also the sense of a group rushing to put out another album (close on the heels of Xoo Multiplies). One of Sakamoto’s efforts (“1000 Knives”) comes from his 1978 solo album, revisited here as a twisted blurp of an instrumental; the other (“Happy End”) is all atmosphere and no substance. And YMO’s attempt to understand rap (“Rap Phenomena”) is as plodding as it is embarrassing. However, there are some standout tracks on side two: “Cue” by Hosono and Takahashi is a very assured ballad, given sufficient frisson by its galloping synth line and strangely programmed drums; “U•T” is a Kraftwerk-ian instrumental charged with menace and speed; and “Loom” finally gets to a calm resting place of dripping water, floating electronics, and a Eno-esque atmosphere. If only the first half was a good as the second.