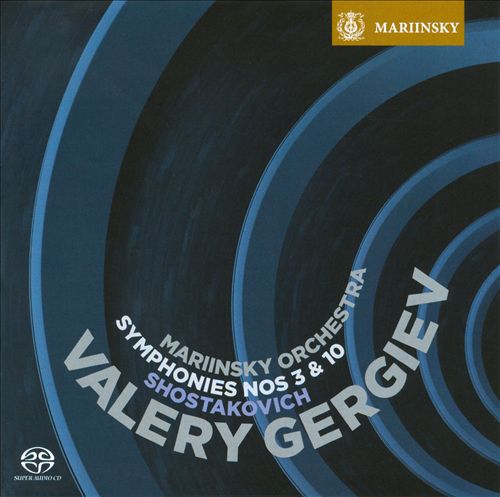 The trend in the 21st century has been to let the suppressed emotions detailed in the still-controversial Shostakovich memoir Testimony spill over into performances of his music, and this is all to the good: the emotional core of Shostakovich’s music is the experience of living under repression at a fundamental level. But that’s not to say soberer, more controlled readings don’t have their place, as well, and conductor Valery Gergiev and the Mariinsky Orchestra deliver some here. The program opens with the Symphony No. 3 in E flat major, Op. 20 (“The First of May”), one of the least-often-performed of Shostakovich’s 15 symphonies. Composed in 1930, the work carries overtones of the breakdown in freedom that accompanied the Soviet Union’s second decade; it’s as if the composer was unsure of what he could get away with and ended the work with some rather plain patriotic choral music. The Symphony No. 3 serves almost as a prelude to the much longer and weightier Symphony No. 10 in E minor, Op. 93. In both works Gergiev’s readings are restrained, with the entire album recorded at very quiet dynamic levels, as if hesitant to make too much of a statement. The quick central movements, often taken as slightly angry commentary on Joseph Stalin, the dictator whom Shostakovich had managed to outlast, are crisp but not especially tangy, and in the giant 23-minute opening movement Gergiev sacrifices emotional intensity for a remarkable sense of the long line of the whole. There are plenty of other choices on the market for the Symphony No. 10, but those interested in letting the music speak for itself will find a masterly recording here, in audiophile-quality sound.