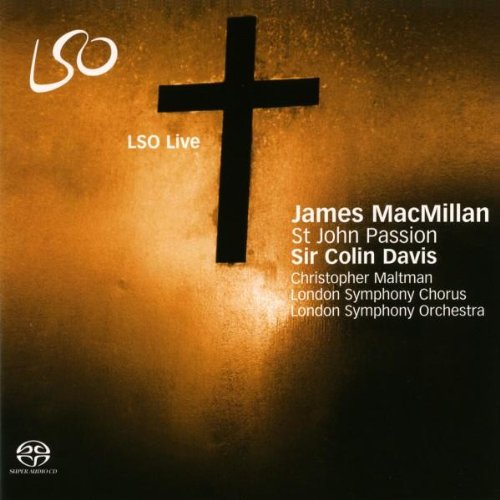 James MacMillan’s St. John Passion, completed and premiered in 2008, was commissioned by a consortium that included the London Symphony Orchestra, the Royal Concertgebouw Orchestra, the Boston Symphony Orchestra, and the Berlin Radio Choir. Scored for large orchestra, chorus, chamber choir, and baritone, it’s one of MacMillan’s biggest works and the weight of its significance must have felt like a burden on the composer, a devout Roman Catholic, a constraint on the characteristic freedom of his imagination in the expectation of creating an appropriately magisterial work. The melodic contour of much of the choral writing, particularly for the small Narrator Chorus, is derived from plainchant and has the character of a meandering choral recitative. Jesus’ vocal lines are so floridly melismatic that they come across as precious and mannered rather than plainly communicative. The work has moments of effectiveness, though; by the end of the third movement, MacMillan generates real excitement in the choral writing, and the fourth movement ends in a stunning chorale. He’s at his strongest in the expansively lyrical and powerful final movement, which is for orchestra alone. Overall, though, the Passion falls short of conveying the depth and eloquence for which the composer was clearly aiming. It receives an intense and dedicated performance by the London Symphony Chorus and Orchestra, led with conviction by Colin Davis, to whom it is dedicated. Christopher Maltman has a secure and resonant baritone and makes the most of the thankless solo role. The SACD recording is taken from a live performance and is clean and well balanced, although stray vocal sounds, perhaps coming from Davis, are occasionally distracting.