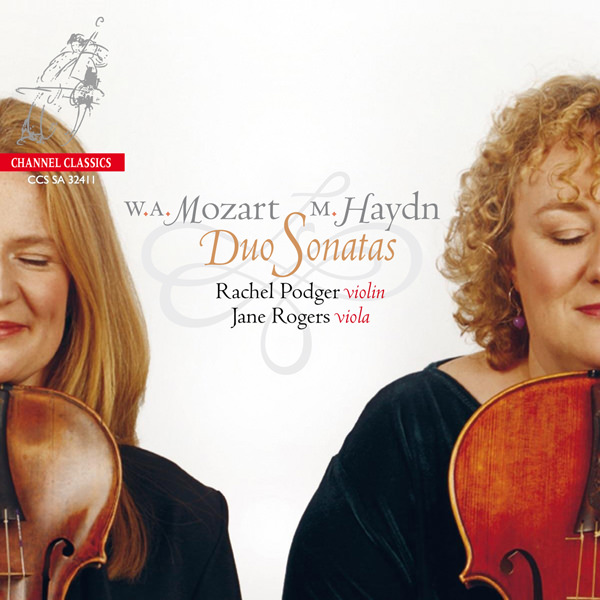 The Duos for Violin and Viola by Mozart have long been favourite pieces of ours – pieces we’d take out and play when there wasn’t a keyboard player or cellist to hand, or busk as teenagers to earn extra pocket money. Back then, the audience’s response clearly indicated how appealing these pieces were as our takings always doubled when we played them!These works never cease to amaze – Mozart uses the two instruments so effectively and with such exquisite craftsmanship that he never leaves one wondering where the rest of the string quartet might have gone….They are also hugely engaging to play and so endlesslyrich and interesting that the appeal to the listener is guaranteed. Mozart’s reference to other genres is always fascinating. In this case the writing is dramatic, operatic even (the violin taking the role as soprano diva (!) and the viola as the heroic tenor?!). One could perhaps go as far to say that these duos are distillations of the art of chamber music as in the Haydn quartets, but more naturally recreational and less self-conscious.For a violist they are about as exposed as you can be; hitherto very few sonatas or concerti had been written for solo viola – and the accompaniment would seldom have been as scant as a single violin. The conversational and imitative nature of the writing allows for freedom andcharacterization, and it was refreshing and rewarding to be as spontaneous as possible in the recording sessions. It was also a diverting and enjoyable experience to record two of the Michael Haydn duos, previously unknown to us both. The character of these pieces is often reminiscentof Austrian folkmusic and it really seems as if you can hear the yodelling vernacular bouncing off the mountains in timely echoes. The challenges in these works are quite different to those of his friend Wolfgang – the demands placed on the violinist are obvious as the writing is busy,yet in need of a casual fluidity, whereas the violist has the task of being constantly inventive with material which is largely accompanimental (melody and bass, in effect). Who knows?Maybe Wolfgang and Michael tried these out during Mozart’s visit to Salzburg when he helped his friend complete a set of six Sonatas in 1783.Rachel & JaneDuos for Violin and Viola

The duo sonata for violin and viola, lodged between the intellectual dialogue of the string quartet and the entertainment value of chamber genres intended for everyday use, was not a common type of composition during the Classical period. Franz Joseph Haydn wrote a few, and the works here by Mozart and Michael Haydn may have been connected in their circumstances of composition. This is a fine recording of the two Mozart duos. British historical-instrument specialists Rachel Podger on violin and Jane Rogers on viola, playing respectively a Pesarinius violin of 1739 and a modern copy of a Guarneri instrument, give the lie to the idea that Baroque specialists tend to give stilted performances of Classical-era music. Of course, the tough, dense Mozart duos, filled with ingenious ways of suggesting a full string quartet, are well suited to the crisper, meatier sounds of historical instruments. The warm buzz of Rogers’ viola sounds terrific in the complicated chordal work Mozart makes her perform. The pair conveys the witty rigor of the variation finale of the Duo for violin and viola in B flat major, K. 424, and Podger has a fine lyric touch in the incongruously operatic slow-movement melodies. The two Michael Haydn duos are both less interesting and less convincingly played, but for an audience of the 18th century as well as ours, they would have represented a relaxing break from the intellectual work of Mozart. The transcription of one of Mozart’s short horn duets, K. 487, makes an unusual and charming finale. Strongly recommended for the way these performances fill out our imagined sound world of these neglected Mozart works. –AllMusic Review by James Manheim