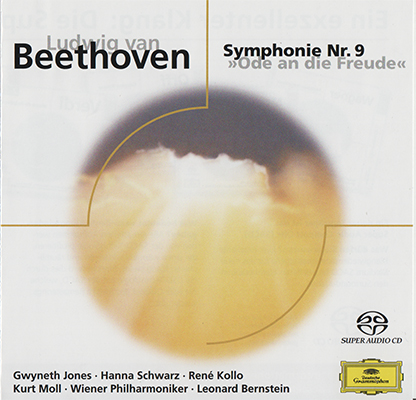 I want to add a very quick review, and I hope it will provide some information on this. I’ve had this on RBCD from its original release in the 1980s. I’m very familiar with this performance and it’s been one of my favorites of all time, next to the Bohm (also with Gwyneth Jones) and the last Karajan one.

In fact right after I ordered the SACD of this one (from JPC using the links from SA-CD.net), I pulled out my old RBCD and listened to it several times before someone bought it from me through my Amazon.com store. It was very fresh in my mind. I received my JPC shipment today and I’ve listened carefully to it on SACD.

Since I love the performance, I’m giving that high marks on performance. The playing is so exciting, and the tempi, which is pretty variable (but we all love that about Bernstein’s perfs), always keeps you guessing. The soli are really great, and I love hearing Kurt Moll do this. Dame Jones can sometimes be slightly off pitch but her musicianship outweighs that.

Regarding the sound, I am NOT impressed with what they’ve done to this. I am very disappointed. While the recording still sounds the same, it sounds like someone just hit the “loudness” button on an old amplifier. There’s no gain in clarity or fidelity — in fact it sounds a little more diffuse that it already did. I expected that the original sound recording would be filled with detail given the size of the piece and all the multi-miking that was going on. But nothing extra is elucidated here. The rear channels just have a little bit of echo to add some sense of space. But overall it all sounds wrong. I’m not impressed by the SACD transfer. I am certainly going to check out the CD-Audio layer and report back about how that sounds in comparison to my RBCD. Hopefully, they didn’t mess that up, too.

If you want this performance on SACD, you can’t really go wrong since it at least sounds as good as the RBCD, and it’s cheaper anyway than the RBCD-only version. I’m torn because I love this performance, but I can not rightfully give it high marks for sound. At least it’s not as awful as the SACD job that was done on Karajan’s second recording of the 9th. ~sa-cd.net

Notice: This SACD contains only Multichannel, no Stereo! That for there is no FLAC version!