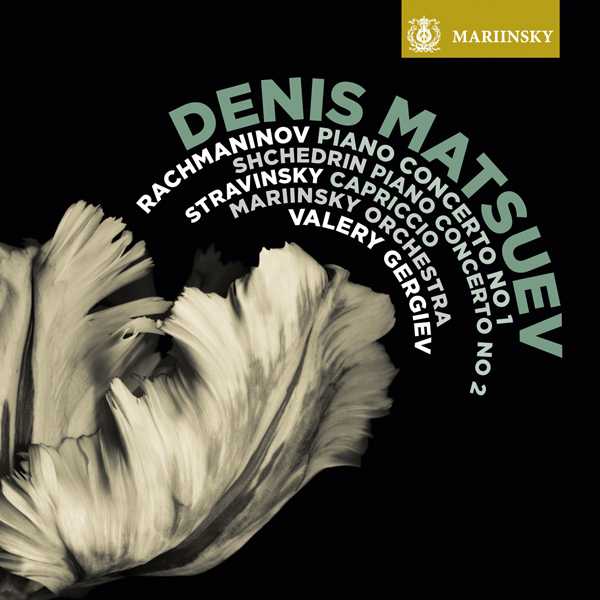 Denis Matsuev showcases works for piano and orchestra by three of Russia’s greatest composers. Renowned for interpretations of music from his homeland, and affectionately known as ‘the Siberian Bear with the fastest paws in the Arctic’, Matsuev’s previous releases on the Mariinsky Label, including Rachmaninov Piano Concerto No 3 and Rhapsody on a Theme of Pagnini, have received widespread acclaim.

Piano Concerto No 1 was written whilst Rachmaninov was still a teenager and though relatively playful in comparison to his other piano concertos, its three movements are full of the showmanship, beautiful melodies and lush orchestral accompaniment that were to characterise his music in the years to come. A similarly playful tone can be found in the revised 1949 edition of Stravinsky’s Capriccio for Piano and Orchestra, which premiered in 1949 with the composer at the piano. Written as a virtuosic vehicle for Stravinsky himself, the piece is characterised by a dancing piano part, full of leaps and bounding with energy. Completing this release is Shchedrin’s Piano Concerto No 2, recorded in the presence of the composer, which influenced by twelve-tone techniques and jazz. Virtuosic writing is a feature throughout, and the final movement sees the surprise introduction of a jazz ensemble, including vibraphone and drum kit.

Speaking about this release, Denis Matsuev says ‘ we wanted to show Great Russian composers from different periods.’ Rachmaninov’s First Piano Concerto is one of my favourites. It was written whilst he studied at the Moscow Conservatory and despite his young age he managed to reveal himself as a great artist. Capriccio is a brilliant work with a wonderful sense of humour. It is also very cinematic; one can envisage this music whilst listening to it and we tried to communicate all of these features to the audience. Shchedrin is a very special composer in the Russian tradition. He takes an active part in rehearsals; we have an opportunity to talk to him, to exchange ideas and listen to his advice. It is a priceless experience.’

This release is dedicated to the memory of Maya Plisetskaya (1925–2015), wife of Rodion Shchedrin and dedicatee of his Piano Concerto No 2, who passed away shortly after the making of this recording.