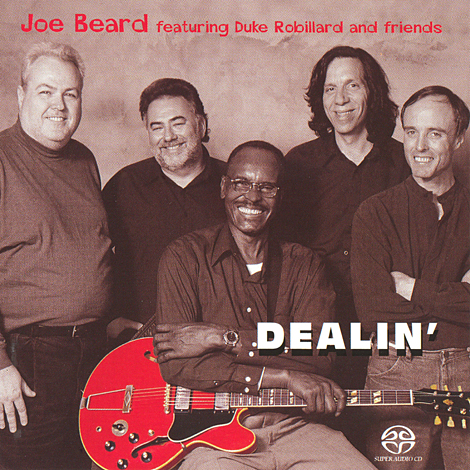 Influenced by blues greats such as Muddy Waters & John Lee Hooker, Joe Beard exhibits genuine talent on Dealin’. Beard has a respectable fan base mostly concentrated on the East and West coasts of USA.

In the blues world it’s OK to be a late bloomer, and when it came to recording, Joe Beard was exactly that. The charismatic singer/guitarist, whose influences range from Jimmy Reed to Lightnin’ Hopkins, worked “day gigs” when his kids were growing up and didn’t start to build a catalog until he was in his fifties. Blues lovers who heard Beard’s AudioQuest dates of the ’90s found themselves saying, “Hey, this guy is very talented; why haven’t I heard of him until now?” And, of course, the answer to that question is that his nine-to-fives and family life had kept him from being a full-time bluesman. But when his kids reached adulthood, the Mississippi native turned Rochester, NY, resident had more time to devote to music. Recorded in April 2000 (when he was 62), Dealin’ is Beard’s third CD for AudioQuest and underscores his ability to handle a variety of electric blues styles. Beard’s appreciation of Reed and the Chicago blues is evident on gutsy, rough-and-tumble tracks like “Give Me Up and Let Me Go,” “My Eyes Keep Me in Trouble,” and “The Bitter Seed,” a Jimmy Reed classic. Like Reed, Beard favors a gentle and laid-back style of singing but still has plenty of grit and doesn’t mind having a tough, hard-driving band behind him. Meanwhile, “Holding a Losing Hand” and “If I Get Lucky” (both Beard originals) go for the sort of moody, shadowy, haunting ambiance that often worked so well for Hopkins and John Lee Hooker. This isn’t to say that Beard is going out of his way to emulate Reed, Hopkins, Hooker, or anyone else. Dealin’ shows who some of his influences are, but it also reminds you that Beard is an appealing bluesman in his own right.